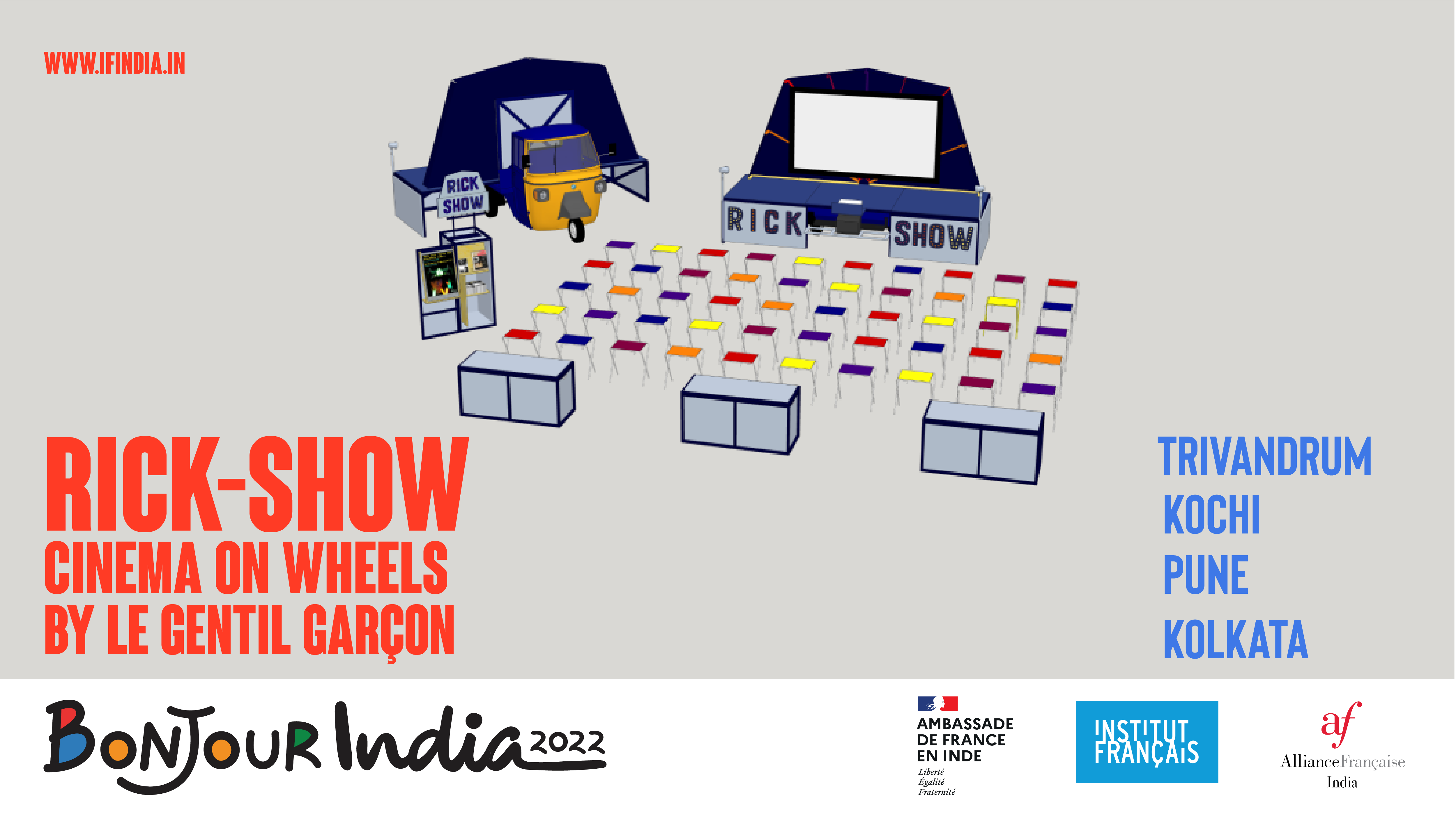 Witness mobile cinema on a rickshaw that fits within a box. Explore five thematic shows from renowned art film collections offered to the general public and art lovers.

When the Rick-Show unfolds, the world of cinema pops up. Why Rick-Show? Because it brings cinema to people on an everyday object – an auto-rickshaw. This artwork creates moments of conviviality after the long months of pandemics without cinema.

Within the heart of the project, there is the desire to showcase contemporary art films to communities that have little access to artworks in India (remote regions, underprivileged communities, etc.). There is also the idea of reaching out to a wider audience in the public space through a permanent – but mobile – artwork capable of touching the heart of Indians both through its medium and its contents. How to join?
◉ Free event, open to all
◉ Entry on a first-come-first-served basis
◉ Strict adherence to Covid 19 protocol

How to join?
◉ Free event, open to all
◉ Entry on a first-come-first-served basis
◉ Strict adherence to Covid 19 protocol

How to join?
◉ Free event, open to all – click here to register
◉ Strict adherence to Covid-19 protocol

Le Gentil Garçon, aka The Nice Guy, is one of those artists with probably about 1000 or more ideas per second. Enfant terrible of the French art scene who does not wish to conform to the dictates of the art market, this artist explores various mediums: drawing, sculpture, installation, performance, video, etc. Through the eclecticism of his artworks, both in terms of the themes tackled, the means used, and the knowledge and references invoked, he is not seeking a signature effect. Driven by curiosity, he feels the imperative need to do everything for the first and last time in his art. In the end, what interests him is not so much the work produced as the process that leads to it.

He considers that reality is not given as an unshakeable truth or something meant to be used instantly. For him, the reality is constructed by each individual, according to his own imagination. The Nice Guy is indeed looking at the reality with children’s eyes or scientists’ eyes, which is for him, quite the same process, and asking how things work. By looking at the reality and questioning it, he realised that it is changeable and constantly slipping from our hands. So he decided to stop learning, and, from then on, to invent the unknown.

With an interest in both popular expressions and scholarly practices, and under the guise of lightness, the polymorphous works of The Nice Guy use all available means to try to shed light on our lives. He does not indicate the path to take but reveals with his flickering halo the infinity of possible trajectories.

Today, his work is shown internationally and since 2006, he has also been chosen several times to design artworks for public art commissions.

The Rick-Show project is developed in partnership with the Department of Design of the College of Architecture Trivandrum (CAT). A team of professors and students are responsible for the design and production of the artwork under the guidance of the artist who intervenes on a distance mode from France.

Organized with the collaboration of: