Language, tourism and culture at French Institute in Jaipur

As Indian audiences, we must have all seen, at some point, the popular campaign around Rajasthan tourism “Jaane Kya Dikh Jaye”. What the ad shows us, is not news. Foreign tourists have, for decades, chosen the state for their desert adventures, the tryst with forts and the much publicized camel rides. French tourists, in particular, have made Rajasthan their hottest destination in north India. In 2017, during a visit to the holy city of Pushkar, I had a chance encounter with a young boy of 11 perhaps, who spoke “fluent” French, leaving my friends, most of whom were French nationals, rather awestruck. This is a common occurrence on the streets of Pushkar, Udaipur, Jodhpur, Ajmer and of course Jaipur.

French language is a widely spoken foreign language in Rajasthan, in fact it would be no exaggeration to say “the most spoken foreign language”. It is taught in universities, schools, and handed down as somewhat of a legacy from one generation of tour guides and shopkeepers to another generation, that keeps alive the tradition of greeting you with a “bonjour” and offering a smattering of “ca va bien, merci!” the instant they sense some French speaking atmosphere around.

It should come as no surprise therefore, that IFI Jaipur selected a group of hospitality and tourism sector employees to launch its first batch of “French with a specific objective.” The course is set to debut at the end of October, in its first intensive format training in Jaipur. The objective is simple: build a community of learners who work in a sector that is actively growing and will be one of the most influential parts of the state’s economy in the future.

Nikhil Pandit, who is a student of B2 at IFI Jaipur and director of TGS Tours, and Founding Secretary Rajasthan Association of Tour Guides, has to say, “More than 250000 tourists visit India from France. For anyone in the tourism industry it is vital to be familiar if not fluent with the French language in order to make the most of this very substantial business opportunity that the French source market provides. Tour operators, guides, hotel front desk staff, shop salespersons will all add great value to their job by listing the knowledge of French in their CVs, it is the time to begin.” 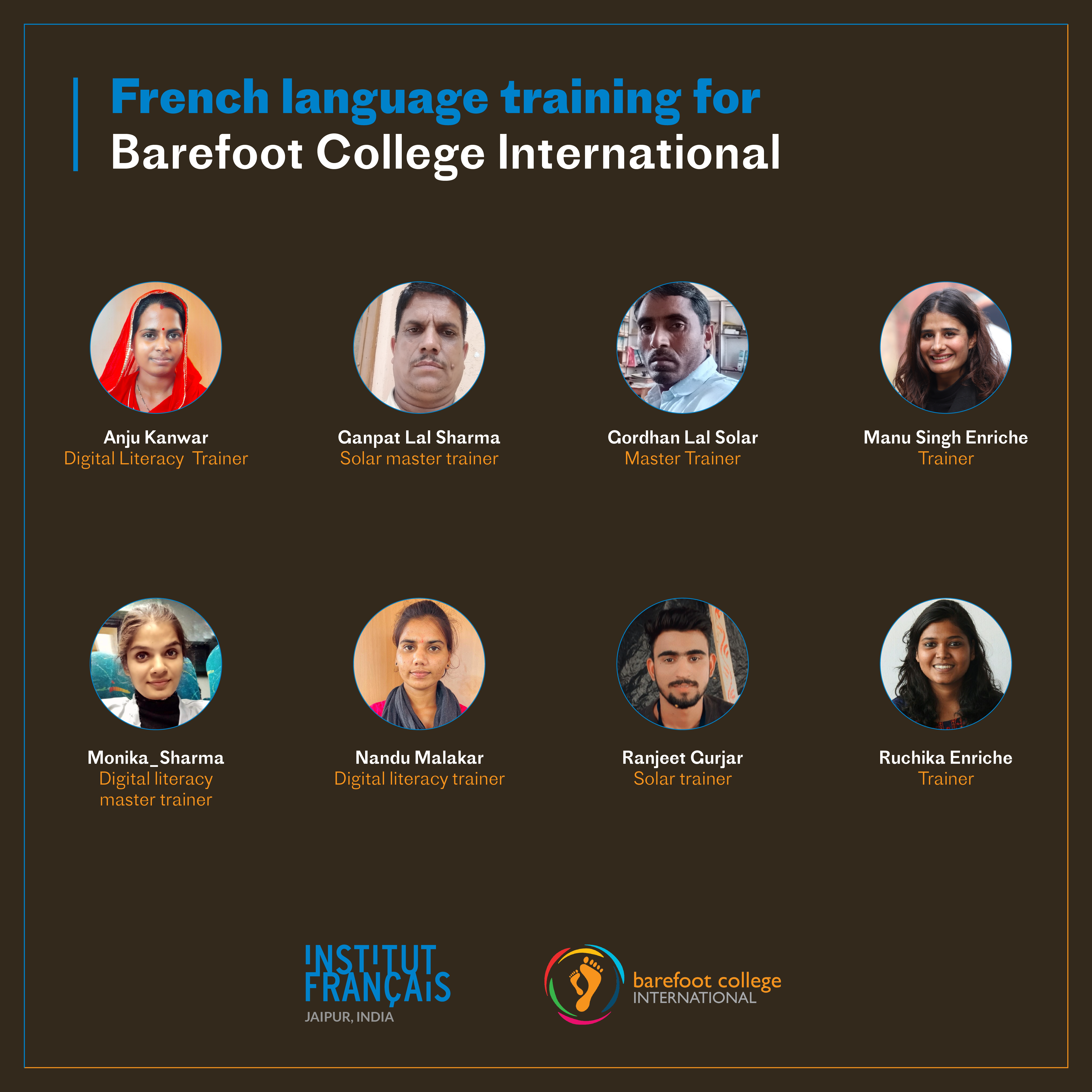 Speaking of tourism, the best news to come out in the last weeks is the slow reopening of borders. It’s been for most of us, a fairly long and dreary stay at home, and the resumption of somewhat a “normal” state of things is heartening. Barefoot College International, is one such organization that has begun to resume its activities internationally in the last month.. For those uninitiated, let me tell you a little more about this organization. Barefoot College is an organization that seeks to empower marginalized communities through training, skill development and support especially the rural poor, and mostly through solar energy training and digital empowerment besides community building, food resilience and so on. Their most significant work happens in global South and North Africa and South America in training solar energy workers, especially women.

In September, Barefoot approached IFI Jaipur for support to train their solar energy and digital literacy workers in French language. These teams are largely involved in Francophone African countries and need to speak and use French often when working on the ground. The training for the first batch starts mid October with 10 participants.

But language has far reaching implications, not limited to culture and tourism, especially when you look at the work of public universities in Rajasthan. In a significant step to strengthen the exchanges between students and faculty and joint research programmes between France and Rajasthan,  especially in the domain of language, culture and literature, the university of Aix Marseille has signed 2 MoUs – one with Rajasthan University and their department of European Languages and Culture and a second more broader one with Manipal University Jaipur. Both agreements will actively welcome students on exchanges starting next spring.

No age for learning: Teachers of English choose to train with IFI Jaipur

It’s common knowledge — for any linguistic programme  to be successful we need trained, certified teachers, and this is, more often than not, a huge challenge especially in the smaller cities of Rajasthan. The standards set by the Ministry of Education in France, stipulates that teachers must match upto a certain criteria, which challenges the entire recruitment and training of our staff.  In a first of its exploration, IFI Jaipur has identified English language teachers in Ajmer and Udaipur who are being trained in French as a Foreign Language so that they can take charge of their French departments after the successful completion of their 2 year training programme. Currently 7 teachers have completed their A1 level and are now enrolled in A2 intermediate level training.

Let’s hear from Mr. Adhiraj Singh, principal of Mayoor School Ajmer, who has just completed his A1 level training and successfully moved to A2, what’s his experience so far has been:

“Out of the blue, came this opportunity – a special training programme for teachers – offering a very well structured course in French language. The idea of learning French itself was exciting enough to set the ball rolling. I now have the language bug, big time and I am determined to immerse deep in learning French. So here I am…Level A1 completed…such a relief as well as a sense of achievement…and already enrolled in Level A2 …AND THE SAGA CONTINUES”

Echoing his sentiments, Shweta Sukhwal of Maharana Mewar Public School, which is our second partner school for this programme of teacher training, says:

Translated: “I had the chance to learn French through this programme offered to my school by the French Institute in India, Jaipur. The course was certified and offered by the French Embassy in India. The course structure designed by the instructor Mr. Pankaj Kahndelwal was useful and very good. I would like to speak fluently in French, and teach my students, with many fun activities. I plan to write stories and poems in French for my blog!”